Sure, I’ve seen gumball-sized plastic objects spit out by hobbyist-caliber 3D printers. But it took a visit to the Fraunhofer Research Institute for Additive Manufacturing Technologies (Fraunhofer IAPT) in Hamburg to understand what it takes to apply 3D printing to industry-grade products. In this case, the objects produced are made from metal.

For 17 years Claus Emmelmann, a professor at Hamburg University of Technology (TUHH), has been praising the use of additive manufacturing. (An Airbus manager encouraged him to continue work on it even as others derided his efforts.) Now he has an institute dedicated to the topic, which can train engineering students in theory and application. These engineers will get hired all over the world, he added. For car maker BMW, as an example, 3D printing is “the most important topic for them.” The institute, whose current site opened earlier this year, has about 100 research employees, and it’s already generating €150,000-€200,000 per month working with companies.

“3D printing will be an industrial revolution,” Emmelmann asserted. Why the big deal? The equipment housed in this institute is capable of producing better quality than conventional manufacturing allows for. In metal production, he explained, there are three levels of basic quality: casting (good), milling (better), and forged (the best). “At 3D printing we get forged quality,” he said.

Also, 3D printing could be used for making small runs of highly engineered objects. For instance, a 3D metal printer might be placed on an oil rig to rebuild broken parts more quickly, thereby reducing downtime. Likewise, there are military applications.

For the latter category, we were given a peek at the caliper in the braking system that operates in the back wing for the $3 million Bugatti Chiron. The part is poetic in its precision. 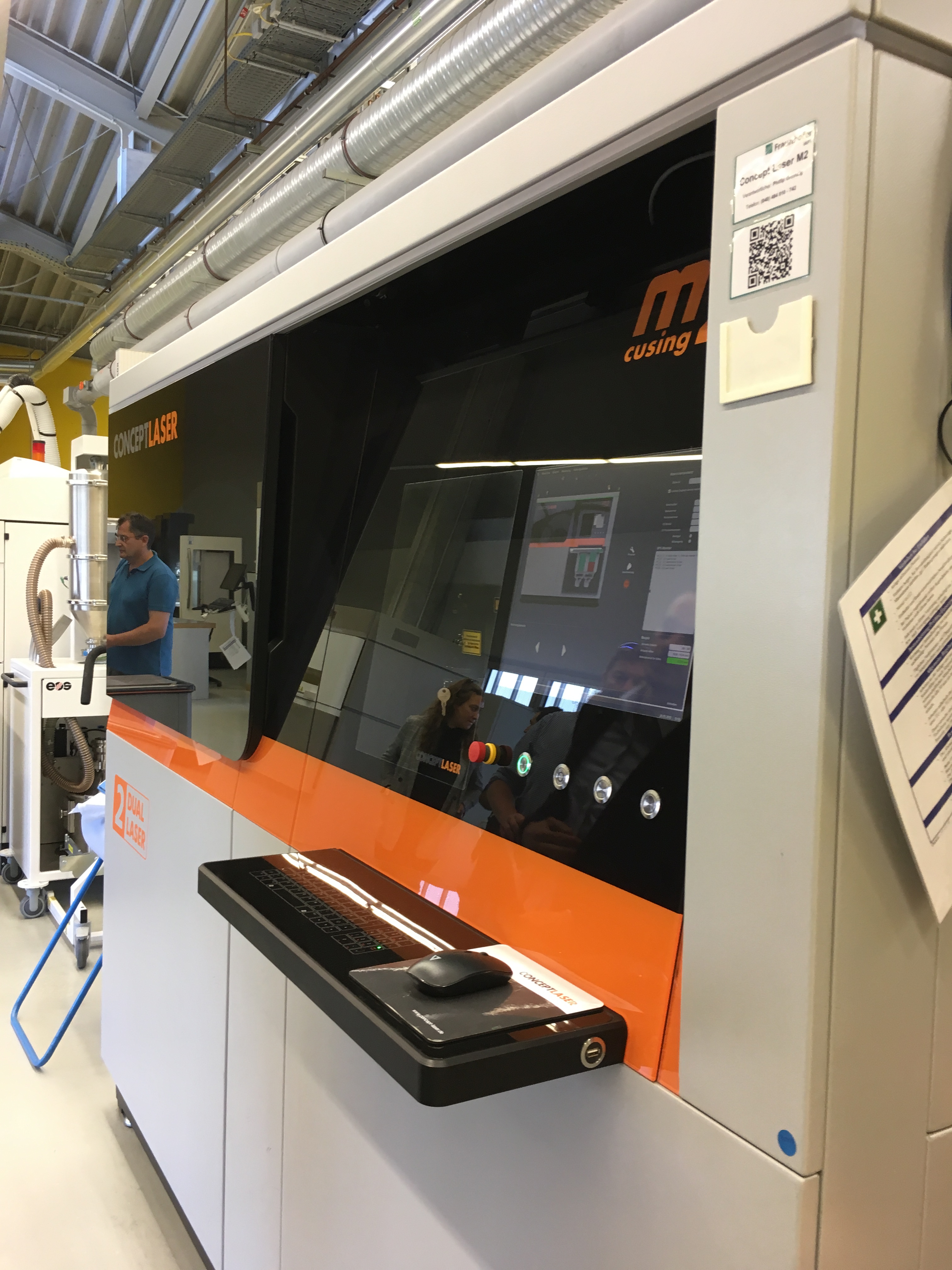 Based on the brief education our journalist group was given by Juan Diaz del Castillo, a member of the Institute’s quality assurance & qualification team, here’s how 3D metal printing works (mistakes are my own!). The metal is an alloy that arrives in powder form. The massive machines that serve as the printers are robots that “grow the parts” by directing a highly targeted laser (or “electric gun”) at the powder to melt it into the appropriate shape and build the object up layer by layer. (Those layers can be as precise as 10 micrometers, a tenth the width of a human hair.) As a layer of metal alloy is melted onto the previous layer, the platform upon which it sits is lowered for exacting placement of the next layer.

3D printing can also be used for more consistent welding jobs. One space we visited included a room-sized robotic 3D print-set-up the size and height of a basketball court to create large objects, such as the welding needed to frame a boat.

Supports are printed as additions to hold up parts of the object that would otherwise just drop onto the platform. And a clean-up process removes the extra support materials once the object has been finished. However, that still needs to be automated. Currently, it’s handled manually; students use hammer and chisel, Dremel machines and sanding to remove the supports. 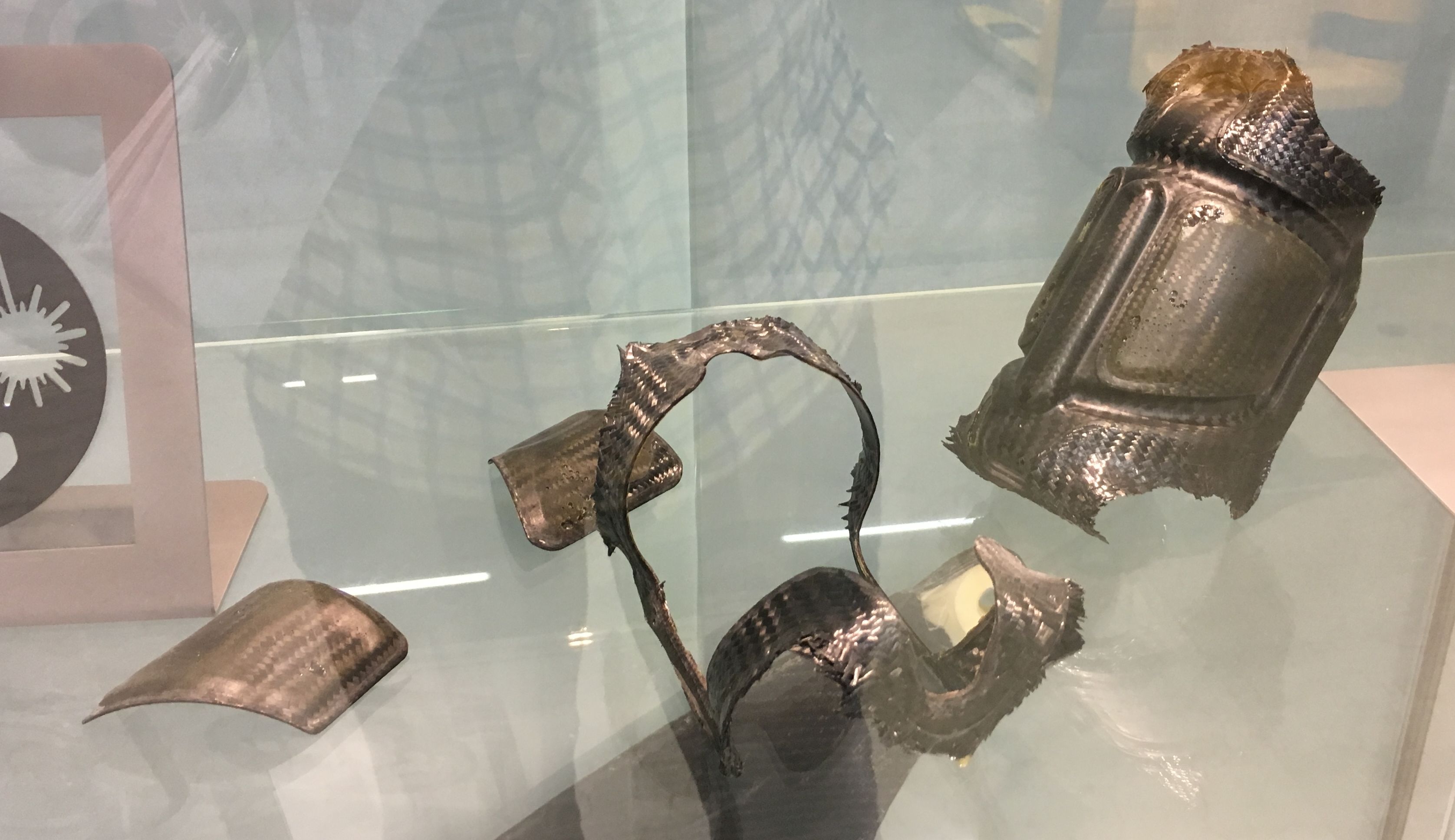 Currently, the process is more expensive than traditional forms of metal working. While casting is about €100 per kilogram, the laser additive costs €1,000; The direction it’s heading, however, is to €3/kilogram, said Emmelmann. The goal, he added: to “become the Google for industry demand.”

When will we begin seeing greater use of 3D metal printing? “The industry is very skeptical right now,” said Diaz del Castillo. Additive manufacturing accounts for just one percent of tooled production. For growth, he noted, “You need to change the mindset of engineers.”