Patrick Grosa emphasized that he wants visitors to think of three things when they visit his city: hardware, software and the connectivity (specifically, 5G) for building smart-er devices. Grosa is the managing director and head of Research & Technology Transfer for High Tech Startbahn, a new Dresden organization that intends to bring the players — start-ups, researchers and industry — together in a more structured way to accelerate development of new products and services tied to smart devices.

According to Grosa, what we don’t know about Dresden would pack an issue of Fast Company:

To give us a taste of the Dresden magic, Grosa introduced us to two operations, one a fast-growing start-up that’s already generating paid work from European and Chinese companies, and the other a research organization run by a wild-haired professor juggling dozens of 5G-related projects.

First, the research organization. Frank H.P. Fitzek, the chair of communication networks in the Institute of Communication Technology, a unit in the school of Electrical and Computer Engineering at Technische Universitäte Dresden, is also the 5G Lab Germany coordinator, a position that puts him at the center of a crowd of PhD and master’s students, junior researchers and research assistants exploring applications for 5G — and explaining it to the rest of the world.

A quick explanation of 5G, courtesy of Fitzek (any misinterpretations are my own): This wireless protocol promises faster communication. It achieves this by providing greater bandwidth (a bigger pipe for ethernet or mobile data to pass through), better security and, most importantly, low latency. Latency refers to the delay that happens in communication, when you’ve taken an action and you’re waiting for the response. 5G is the only communications protocol that promises low latency, strictly defined as one millisecond. (Slice a second into a thousand parts, and one of those pieces is a millisecond.) The pause between action and response must be a single millisecond for that communication to be classified as having “low latency.” What this promises, says Fitzek, is real-time communication.

How does this play out in the real world? Perhaps it doesn’t matter if you’re streaming music or video. But if you’re a driverless vehicle that’s part of a mesh network of vehicles — all communicating in real-time to prevent yourselves from crashing into each other or anything else — any variation from that one millisecond latency could make the difference between success and failure. Currently, driverless vehicles, such as the Tesla, relies on a single car being equipped with every sensor it needs to avoid hitting anything else. That’s inefficient, suggests Fitzek, because none of those sensors “can see around the corner.” The network set-up running on 5G could constantly be updating every other vehicle in the mesh to let them know what’s going on immediately around them as well as what’s coming up elsewhere on the route that might cause them to want to change their behaviors.

Fitzek’s team is figuring out the communications to make those kinds of operations possible. When the technologies have been formulated, developed and proven in the lab, it’s licensed to industry or government for turning into products and services.

You’ll hear about 5G first from cellular phone providers as the successor to 4G. However, behind the scenes, the network gear — switches, routers and the rest of it — will require upgrades. Then mobile devices will need to be built that have 5G chips to take advantage of that new infrastructure. Even after those things appear, however, we’ll be living in a hybrid world for a long time. (For example, until I replace my 2004 Camry, it’ll never be capable of communicating as part of a mesh network.)

The professor notes that by 2020 we’ll see release 15 of 5G, “to allow the network vendors to make money” (through the sale of all of that new network hardware and software), and by 2022, we’ll see release 16, which holds the true promise of real-time communication.

5G also plays a role in robotics operations, Fitzek points out, by enabling “cohabitation of humans and robots so they can interact.” Robotics right now can run amok — not by virtue of doing their own thinking but because a human might get in the way of a robot simply doing its job and be injured in the process. In Germany, at least, “safety fencing” is required to be set around a robot performing some manufacturing process. However, with real-time communication in place, a robot could immediately respond to a tap by a human to cease its activity.

Fitzek played a role in the other Dresden organization we visited.

WandelBots (from the German for “change), grew out of a computer science project undertaken through Fitzek’s group. (He’s a co-founder along with five other people.) This start-up is run by Christian Piechnick and served as the first proposal created as part of the smart device hub focus being promoted through the High Tech Startbahn. WandelBots, officially formed in November 2017, has grown from two people to 16 in that short time and expects to be at 25 by the end of the year. 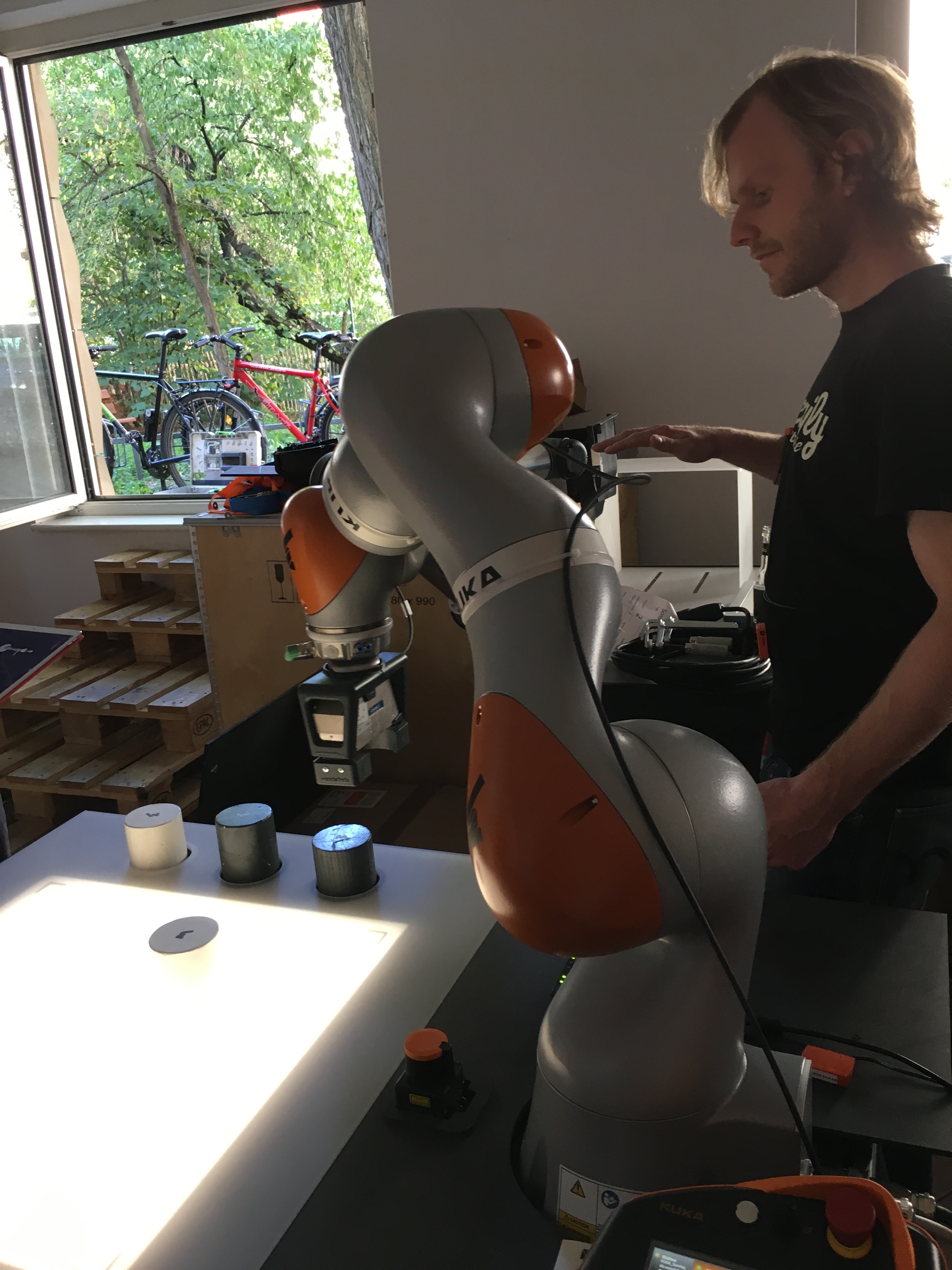 A member of WandelBots’ crew demonstrates how to teach a robot how to handle a particular industrial activity; the data collected on that will be converted into the code used to drive the work afterwards.

This start-up’s idea is simple: to teach robots. Programming robots to perform industrial activities is time-consuming. Piechnick said Volkswagen, as an example, could spend three months or longer putting in place all the activities required to have a robotic arm handle a specific job — such as placing a speaker into a car door. And every kind of robotic arm runs its own software, which means that when a company brings in a new or updated model, the process of programming has to be started all over again. What Piechnick and his team have figured out is how to reduce that three-month process to a single week, a boon for manufacturers that want the flexibility to modify their production line work as needed.

WandelBots uses a combination of hardware and software to “templatize” the programming work. A worker can perform the activity wearing a sensor-laden coat or sleeve, and the robot “learns” the activity by duplicating the worker’s action. Those actions are automatically converted into the code that would otherwise have to be manually programmed. And the programming can be transferred to a “friend,” another robot performing the same work. When adjustments need to be made to the activity, a non-coder can go into the user interface and tweak various settings to enable the programming to adapt to the changes.

Piechnick noted that the tech his company has created is manufacturer-agnostic. It works with the 10 primary robotic arm manufacturers, which among them have 27 different models, addressing 96 percent of the industrial robotics market. When a new robot is introduced, it takes the company about four to six weeks to integrate it. As he put it, “We are democratizing the programming of industrial robots.”

Currently, the company is focused on the European and China markets. In Europe, the car makers — big fans of industrial robots — are obvious targets. In China, it’s semiconductor manufacturers. And by “focus,” we mean, selling into. WandelBots already has paying customers. Interestingly, this isn’t sold as a cloud service; it’s deployed within the companies on their own, private clouds.

It’s obvious that Leipzig and Dresden are proud of what they’re accomplishing on the business-to-business front. Next on our German tour: a visit to Hamburg, where we’ll see applications both business- and consumer-oriented that use virtual and augmented reality.